Joel is an artist working out of Wild Rose Tattoo Co. in Calgary, Alberta.

Joel does classic American traditional tattoos. He has plenty of flash to choose from, or you can bring an idea to him.

Joel does both colour pieces as well as blackwork.

You can search him up on Instagram and see when he is doing walk-ins, or contact him and set up an appointment.

Joel sticks to the classics, and does it well. He has crisp bold lines and solid shading, all within a readable trad piece.  He is a must visit artist if you’re in Calgary.

Don Ritson was the owner of Rebel Waltz in Winnipeg, Manitoba. Now he and his wife work out of a private studio together.

Don has done two of my own tattoos, both of my forearms which are a gramophone and a design based off of the rose of no mans land. Don is a very friendly guy who makes getting tattooed a genuinely pleasant experience.

Don is a must see artist if you are in Winnipeg. He also does guest spots in Canada so watch his Instagram for that as well.

Bartholomew J. Simpson, son to Homer and Marge of the Simpson family. KNown for his quick wit, pranks, and one liners.Bart’s character of rebelliousness and lack of respect for authority have had him described as an updated and modern version of Tom Sawyer and Huckleberry Finn. He is a disruptive student at school, and often causes trouble for his teachers, the principal, and the grounds keeper.

Although Bart is a prankster he has a soft spot for his family, particularly his siblings.

He is often seen with a skateboard, a slingshot, or candy!

Bart can get up to some pretty bad behaviour, but ultimately isn’t a bad kid. He likes having fun (sometimes at other peoples expense) but on a number of occasions he shows true remorse for his actions.

In some of the Treehouse of Horror episodes, Bart is seen as a monster, such as the fly, zombie, gremlin, devil and more.

Dave Lao is a black and grey artist working out of his private studio, Lone Wolf Studios in Winnipeg, Manitoba.

Dave works in realism and sketch work styles. Much of his work is portraiture, such as characters from shows and movies, and lots of animals.

Dave has an impeccable attention to detail; with every line counting.

Most of his portfolio is made up of somewhat larger pieces, but he will also do smaller tattoos which are just as impressive.

Dave is a must see artist for black and grey work in Winnipeg.

Sailor Moon is a popular Japanese Anime show based off the 52 manga chapters entitled Pretty Soldier Sailor Moon. The show premiered in Japan in 1992 and was popular there as well as overseas.

Sailor Moon is the heroine name of the main character, a young woman who fights evil. A cat named Luna gives Sailor Moon, or Usagi (Serena in English), a magical brooch that transforms her into Sailor Moon. Throughout the show Usagi/Serena meets other young women who are also given magical objects able to transform them. Together they form the Sailor Soldiers. Along with being able to transform, they have other items that help them to fight evil.

The show is particularly popular with young woman as it is about strong, powerful women who fight evil and are portrayed as strong and capable, but also human, capable of having human breakdowns as well as strength.The show also has themes of love triumphing over hate.

As a tattoo, many people get Sailor Moon or the other Sailor Soldiers, the cats Luna, Artemis, and Diana, the different magical items, and the crescent moon. These tattoos are often bright and colourful but can also be done in blackwork. Styles range from American traditional, neo traditional, realistic, new school, dotwork, blackwork, black and grey, and watercolour.

Who is your favorite Sailor Moon character?

Wolf tattoo’s are often done in American Traditional, or realism, but can also be done in black and grey, neo-traditional, dotwork, tribal, etc. The wolf is often a symbol of determination. It can also stand for having strong ties to family and friends, as the wolf is a pack animal.

The wolf is a particularly meaningful animal for Native American peoples; it is seen as a totem of power and strength, and also a spiritual guide. Wolves are symbolic of family life, as wolves mate for life and are strong parents.

The wolf can also be used to represent hard times, or surviving hard times. A wolf tattoo that features a dagger often means that the person wearing the tattoo has overcome hardship, as well as a promise to oneself that they will never be defeated by personal struggles. Whatever the reason for a wolf tattoo,it is a strong design.

Black and grey wolf by Matthew Henning of Sacred Heart tattoo in Manchester. 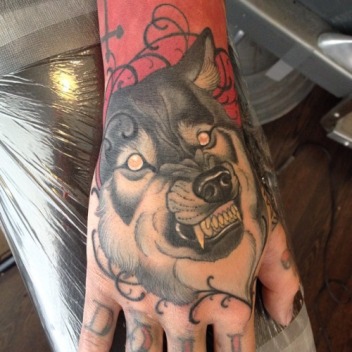 Another popular wolf design is a woman wearing a wolf as a cowl, often inspired by Little Red Riding Hood or Princess Mononoke.

Devil tattoos are one of the classics in tattoo history. Devil doesn’t always refer to a red man with horns, it can also be just a symbol of evil. Having a symbol like this on your body can mean protection from demons/the devil by scaring them away. It can show a mischievous side of you, or a rebellious attitude. Sometimes they can be portrayed with an angel counterpart, or a woman, generally symbolizing the balance between good and evil.

Here are some of the best devil tattoo designs. They come in all kinds of styles, from American traditional, to neo-traditional, new school, black and grey, watercolour, realism, and experimental. Whatever the style, a devil tattoo is bold “as hell”.