Pluviophile (n)- A lover of rain; someone who finds joy and peace of mind during rainy days.

As a pluviophile myself, I love anything related to rain and storms. The sight, sound, and smell of rain all make me feel happy and at peace. Some of my favourite art is inspired by storms and rain, and that includes tattoos.

As a tattoo, some common rain themes include rain clouds, storm clouds with lightning, umbrellas, and people in the rain.

What is your favourite thing about rainy days?

Gakkin is a (mainly) blackwork and freehand artist working out of Amsterdam after first working in Kyoto.

His pieces are all large scale. Full sleeves, large torso pieces, back pieces, and bodysuits.

He collaborates often now with another Japanese blackwork artist, Nissaco. The two work well together, and their pieces flow seamlessly into each other.

His work is largely inspired by nature. Everything from wind, water, flowers, mountains, the sun, and the moon, and animals.

Though he mainly works with black, he does also add splashes of red to draw the eye. In an interview with Tattoo Life, he said about working with black “I believe that black is the most important color in tattooing. Every ancient tattooing culture – Maori, Japanese, and Polynesian – considers it as such. It just works better than any other color on the skin.” (www.tattoolife.com)

Which piece is your favourite?

Jinpil Yuu is tattooer and owner of the tattoo studio The Ravens Ink in Seoul, South Korea. Jinpil is famous for his flower tattoos, particularly his peony’s. Jinpil uses brilliantly deep and vibrant colours for his colour pieces.

For his flower tattoos, Jinpil uses heavy contrast between red/orange, and black/dark greens.

He is also known for his blackwork, and Korean style pieces. Particularly gakubori, such as clouds and water, as well as snakes.

Jinpil Yuu is an artist you must visit in Seoul!

Monmon is a Japanese term for tattoo, and a monmon cat is a cat with tattoos. They were designed by Horitomo, a Japanese tattoo artist well known for his hand work (tebori) and his monmon designs. He published a book entitled Monmon Cats and has inspired other tattoo artists around the world.

Monmon cats are usually done in traditional Japanese style, and usually have their own Japanese tattoos. They can also be done realistically, in black and grey, and have other tattoos such as American traditional, flowers, and skulls.

Monmon cat tattoos are a must for cat lovers!

Daniel Anibal is a talented tattoo artist working out of Atlantico Tattoo and Sagrado Corazón Tattoo, in Spain. His work is mainly colorful traditional tattoos, but he also does brilliant black and grey work, and some Japanese. His work is bold, bright, and graphic, and often takes influences from Japanese style, mixing it with American traditional. 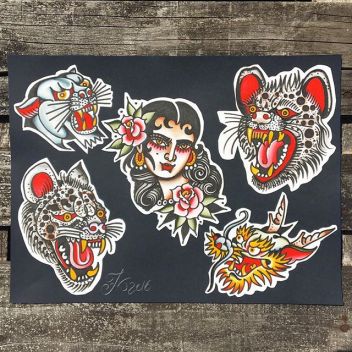 Some original flash work by Daniel.

Check him out if you’re in the area!

Apro Lee is a tattoo artist from South Korea. He tattoos in Seoul in a private studio called Black Mark It. He has been tattooing since 2005, and doing only blackwork since 2007.

Tattooing in South Korea is still illegal, making it difficult as you can imagine for someone to make a living as a tattoo artist. Only a person with a doctor’s license can be a tattoo artist. Police don’t bother artists unless someone actually reports them. People who usually do the reporting are often other tattoo artists looking to get rid of competition, or neighborhood gangs. If an artist is reported and apprehended, they usually have to pay a fine as well as have all their equipment taken from them, but they can also face months of prison time. Despite tattooing being a crime, it is estimated that there are at least 20,000 tattoo artists working in illegal studios throughout South Korea.

Apro Lee decided to become a tattoo artist while serving his mandatory military time. He saw a portrait of Kurt Cobain on the internet, and it amazed him that tattoos could be something other than tribal or dragons and other iconic Japanese pieces, for gangsters. Apro has loved drawing and art since he was a child, and found that tattoos were the right fit for him.

Since tattooing for all intents and purposes is still illegal in Korea, Apro learned how to tattoo online in 2005 from someone who was willing to teach Apro and a few others through the internet. After that Apro went to work in Westside Tattoo in Brisbane, Australia, learning from owner Matt Cunnington.

Apro started by doing realistic black and grey pieces, but now almost solely does bold blackwork. One of Apro’s signature designs is the Korean tiger, which features hard bold black lines, and intricate dotwork to create a stunning tiger in the Korean style. The contorted tiger represents government, and is usually featured with a magpie which represents a person laughing in its face. 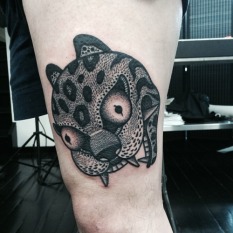 Apro wanted to show people that Korea has their own art style, as Chinese and Japanese art largely dominates Western ideas of what Asian art is. Apro has been a guest tattooer in Europe, Australia, America, and all over Asia, spreading the Korean style of tattooing. Apro always tells people the meaning of the tattoos he is giving people, and wants to spread Korean culture as much as possible.

Apro also tattoos many nooses on his clients, and has one on himself as well. The noose on himself signifies the fact that in his country he is technically a criminal, but the part where the noose is cut means that he has survived, or that he will survive it. On clients this can stand for many things throughout a life that has been tough.