Jack is a black work artist working out of Insider Tattoo in Edinburgh, Scotland.

Jack does do some smaller pieces, but most of them are fairly large. Such as sleeves, backs, half sleeves, and chest pieces.

Jack is a must visit artist if you are in Scotland.

Susanne is a tattooer at Redwood Tattoo Studio in Manchester. She does fine linework, dotwork, and blackwork. All of her tattoos use only black ink, but her intricate dotwork make a great contrast to the heavy black.

Much of her work features popular characters or places from books, film, and tv.

She draws much inspiration from histories famous painters, and even does their portraits.

Her whimsical animal portraits are fantastical and heartwarming, such as space narwhales, dogs in space, dinosaurs in clothing, etc.

Susanne is a must see artist if you’re in Manchester!

Frida Kahlo was a painter born in Mexico in 1907. She mainly painted self portraits, but many were heavily stylized, and some based on current pop culture.

Frida’s art has been called surrealist, and magic realist. Her paintings are praised today by feminists for their depictions of the female experience and form.

Frida became an artist during recovery after she was injured in an accident when she was eighteen.

She became interested in politics in 1927, and joined the Mexican Communist Party where she met her husband. The two divorced in 1939 but did re marry.

Frida traveled Mexico and the United States, and was given a solo exhibition at the Julien Levy Gallery in New York in 1938, which was a massive success. This was quickly followed by another exhibition in Paris the following year.

Frida had her first solo exhibition in Mexico in 1953.

She died the following year at the age of 47 due to bronchopneumonia.

Though she was relatively well known in certain circles during her lifetime, her work wasn’t appreciated the way it is now until the 1990’s, when her paintings became icons for feminists, Chicanos, and the LGBTQ community.

Which is your favourite?

Baphomet today is regarded as a Satanic figure, but for a long time Baphomet was actually a word for the prophet Mohammed in Islam, and worshipping a Muslim god or prophet was seen as idolatry. The Knights of Templar were accused of worshipping Baphomet the false idol in Medieval France, and were tortured under King Philip.

Over the next 500 years, Baphomet changed from Mohammed the prophet, to a hermaphroditic stone figure borrowed from Egypt or the Gnostic Christian Ophites. This was after both scholars and mystics studied the Knights of Templar, writing that the Knights brought back ancient magical knowledge from the middle East and North Africa. The idol in question was called Baphomet in 1818, and were most likely just misidentified artifacts from other cultures and religions.

But the final Baphomet that we picture today was created in 1854 by occultist Eliphas Levi for his book “Dogme et Rituel de la Haute Magie” (“Dogmas and Rituals of High Magic“).  Levi describes Baphomet in detail in his book.”The goat on the frontispiece carries the sign of the pentagram on the forehead, with one point at the top, a symbol of light, his two hands forming the sign of hermetism, the one pointing up to the white moon of Chesed, the other pointing down to the black one of Geburah. This sign expresses the perfect harmony of mercy with justice. His one arm is female, the other male like the ones of the androgyn of Khunrath, the attributes of which we had to unite with those of our goat because he is one and the same symbol. The flame of intelligence shining between his horns is the magic light of the universal balance, the image of the soul elevated above matter, as the flame, whilst being tied to matter, shines above it. The beast’s head expresses the horror of the sinner, whose materially acting, solely responsible part has to bear the punishment exclusively; because the soul is insensitive according to its nature and can only suffer when it materializes. The rod standing instead of genitals symbolizes eternal life, the body covered with scales the water, the semi-circle above it the atmosphere, the feathers following above the volatile. Humanity is represented by the two breasts and the androgyn arms of this sphinx of the occult sciences.”

As a tattoo, people often get the full bodied Baphomet, or a goats head, as goats are often also related to Satanism as well as witchcraft and paganism. Full bodied goats and goat heads are also popular in part thanks to the film The Witch, and the Satanic goat named Black philip. Generally these tattoos are done in blackwork or black and grey but also realism, neo traditional, and American traditional.

Which style is your favorite?

Stephen McConnell is an artist at Main Street Tattoo Collective in Winnipeg, Manitoba.

Stephen McConnell is a must visit artist in Winnipeg!

Jade Harper is a tattoo artist and owner of House of the Rising Sun in Winnipeg. Jade does mainly blackwork American traditional pieces, but has been doing more bold colourful works recently as well. She’s also very well known for her cowboy and cowboy girl pieces.

Due to the current pandemic (April 2020) Jade and other artists cannot tattoo temporarily, but she is still selling paintings. Check out her Instagram to do so, linked above.

Jade has a large amount of her own tattoo flash to choose from, and she also takes ideas, and will make changes to her own flash to suit the client’s needs.

Jade focuses on being inclusive in her shop, and is proud to be the owner of the (currently) only queer owned and operated shop in Winnipeg. She acknowledges that tattoo shops can be a (sometimes) intimidating place, particularly for those in the LGBTQ community, as well as people of colour, so she’s created the space to be a welcoming place for all.

Jade is a must-see artist in Winnipeg if you’re passing through, or a local looking for someone great!

Create your own blog with the link below.

Studio Ghibli was officially founded in 1985 after the success of Nausicaä of the Valley of the Wind, which came out in 1984. The character of Totoro from My Neighbor Totoro is the company’s mascot, but the company’s most popular film is Spirited Away, which has won multiple awards such as a Golden Bear, and an Academy Award.

The company is most associated with award winning director Hayao Miyazaki, but the company also has other talented directors such as Isao Takahata, Yoshifumi Kondo, Hiroyuki Morita, Gorō Miyazaki, and Hiromasa Yonebayashi.

The film company has many amazing movies, with brilliant characters that have captured the hearts of fans all over the world. Fans around the world have immortalized Ghibli characters on their skin with the help of some amazing tattoo artists.

What is your favorite Ghibli movie?

Ryan and Matthew Murray are identical twin tattooers who do brilliant dark, blackwork tattoos in Salem Massachusetts working out of Black Veil Studio. Being in Salem the two are drawn to the darker side of life.

The two men do fantastic, realistic horror and death related artwork. Their pieces are brilliantly realistic and detailed.

Be sure to see them if you’re going through Salem!

Since its first episode as part of second season in 1990, the Treehouse of Horror has been a huge hit with Simpsons fans. Dark, witty, and chalk full of pop culture references, Treehouse of Horror is always sure to be a spooky addition to your Halloween festivities.

Many episodes are based loosely off of various monster movies, horror, and thriller movies and books, such as; Nightmare on Elm Street, Frankenstein, Psycho, Amityville Horror, Twilight Zone, The Exorcist, Poltergeist, The Shining, The Monkey’s Paw, King Kong, Night of the Living Dead, Dracula, The Raven, Clockwork Orange, and more. 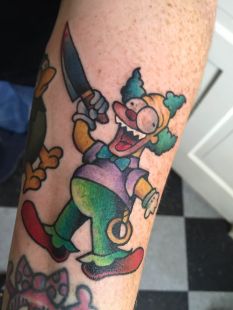 The Treehouse of Horror episodes also often feature a fun alien duo, Kang and Kodos, who are always up to some sort of mischief.

What is your favorite Treehouse of Horror episode?