Sailor Moon is a popular Japanese Anime show based off the 52 manga chapters entitled Pretty Soldier Sailor Moon. The show premiered in Japan in 1992 and was popular there as well as overseas.

Sailor Moon is the heroine name of the main character, a young woman who fights evil. A cat named Luna gives Sailor Moon, or Usagi (Serena in English), a magical brooch that transforms her into Sailor Moon. Throughout the show Usagi/Serena meets other young women who are also given magical objects able to transform them. Together they form the Sailor Soldiers. Along with being able to transform, they have other items that help them to fight evil.

The show is particularly popular with young woman as it is about strong, powerful women who fight evil and are portrayed as strong and capable, but also human, capable of having human breakdowns as well as strength.The show also has themes of love triumphing over hate.

As a tattoo, many people get Sailor Moon or the other Sailor Soldiers, the cats Luna, Artemis, and Diana, the different magical items, and the crescent moon. These tattoos are often bright and colourful but can also be done in blackwork. Styles range from American traditional, neo traditional, realistic, new school, dotwork, blackwork, black and grey, and watercolour.

Who is your favorite Sailor Moon character?

Jade Harper is a tattoo artist and owner of House of the Rising Sun in Winnipeg. Jade does mainly blackwork American traditional pieces, but has been doing more bold colourful works recently as well. She’s also very well known for her cowboy and cowboy girl pieces.

Due to the current pandemic (April 2020) Jade and other artists cannot tattoo temporarily, but she is still selling paintings. Check out her Instagram to do so, linked above.

Jade has a large amount of her own tattoo flash to choose from, and she also takes ideas, and will make changes to her own flash to suit the client’s needs.

Jade focuses on being inclusive in her shop, and is proud to be the owner of the (currently) only queer owned and operated shop in Winnipeg. She acknowledges that tattoo shops can be a (sometimes) intimidating place, particularly for those in the LGBTQ community, as well as people of colour, so she’s created the space to be a welcoming place for all.

Jade is a must-see artist in Winnipeg if you’re passing through, or a local looking for someone great!

Create your own blog with the link below.

Grace Neutral is a handpoke, dotwork, blackwork artist, tattooing out of London England. She has been a tattoo artist since 2012 after being a piercer prior. She is most known for her unique look; pointed ears, split tongue, many piercings and tattoos, no belly button, and most notably, her purple tattooed eyes. She is a huge fan of Hayao Miyazaki’s work, particularly My Neighbor Totoro, and often tattoos characters from the film, and other Miyazaki films. She does many mandala tattoos, and incorporates her own style into her work. She guest spots at many different shops in London, but also around the world. If you would like to get ahold of her for a tattoo, email her here at graceneutraltattoo@gmail.com. 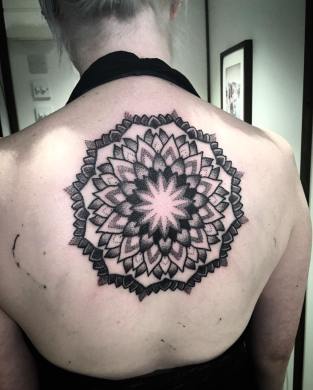 Detailed mandalas always look great, and between the shoulder blades is a solid placement for these designs.

Which one is your favorite?