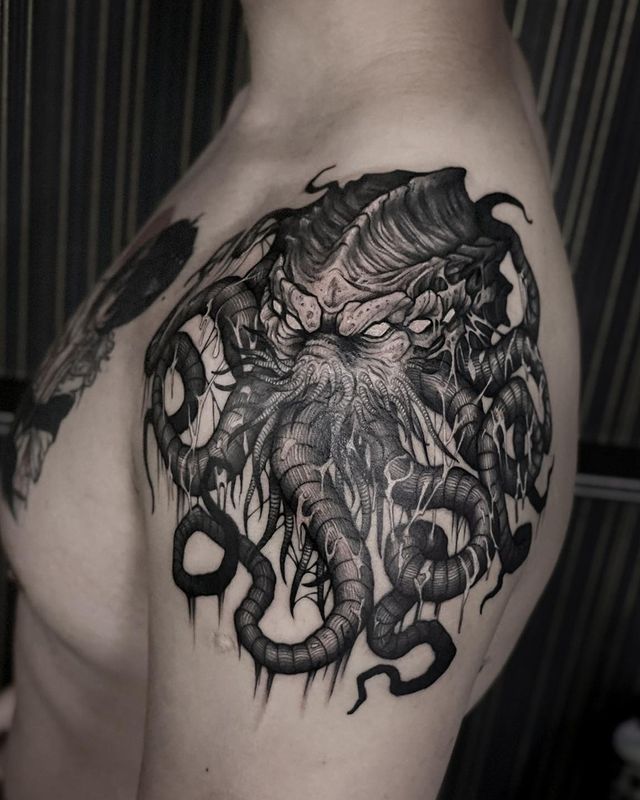 Cthulhu is a fictional entity that was created by horror-fantasy writer H.P. Lovecraft and was first seen in 1928 in his story The Call of Cthulhu. Its physical appearance is supposed to be so horrible that it destroys the sanity of anyone who looks at it. It is described as “a monster of vaguely anthropoid outline, but with an octopus-like head whose face was a mass of feelers, a scaly, rubbery-looking body, prodigious claws on hind and fore feet, and long, narrow wings behind.”

Cthulhu is a priest or leader for “the Old Ones” who are a species that came to earth from space well before humans came to be. The Old Ones lay dormant and their city was buried under the earth’s crust, beneath the Pacific Ocean. They were more or less forgotten about by the majority of humans, except for certain “uncivilized” groups of people who remembered Cthulhu and the Old Ones and worshipped them in horrible rites and rituals.

H.P. Lovecraft is regarded as one of the most influential and well-known horror-fantasy writers, having influenced modern horror writers and directors such as Stephen King, Guillermo del Toro, Junji Ito, Matt and Ross Duffer, Matt Ruff, Misha Green, and countless others. He is also known as the creator of the sub-genre of horror known as “Cosmic Horror”.

Despite Lovecraft’s wide reach, he was also extremely racist, and people like Matt Ruff and Misha Green (Lovecraft Country) have worked to expose that while still recognizing the cultural relevance, particularly of Cthulhu and other creatures. By the early 1930’s he was defending white Lynch mobs and praising Hitler in letters to friends, and short stories such as “The Shadow over Innsmouth”, and “The Horror of Red Hook” made non-white folks out to be primitive and less than human.

As a tattoo, many people choose to get Cthulhu in a more realistic style, although neo-traditional and new school are also popular. What is your favourite story featuring Cthulhu?