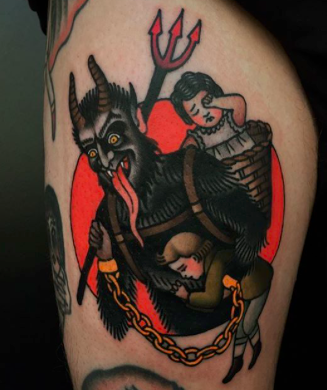 Krampus is the demonic, German counterpart to St. Nicholas. St. Nicholas is the original Santa Claus; the patron saint of children. European cultures did (and to some degree still do) celebrate(d) St. Nicholas early in December every year. But equally fear(ed) Krampus; the Christmas demon who punishes children. He is usually seen as a massive beast, similar to a Greek satyr or faun, but much more menacing.

Similar to Santa, Krampus also carries bells, lulling children into a false sense of security. He also carries a bundle of long birch sticks so he can beat children.

He saves the worst punishment for the naughtiest children though. Children who are particularly bad get dragged down into the underworld in his large sack to be tortured. Just a bit worse than a lump of coal!

Krampus arrives on December fifth, which is also known as Krampusnacht. The next day is when St. Nicholas arrives and rewards all the good children.

Krampus is becoming more and more popular thanks to movies and tv episodes dedicated to the beastly Christmas character. People are always looking for a new way to celebrate Christmas, and for those who like the darker side of life, Krampus has become their own Santa Claus.

As a tattoo, Krampus is often done in blackwork style to emphasize how dark and menacing he is. Though American and Neo traditional styles are also quite popular. Krampus is also usually just depicted as a head, but is sometimes seen full-bodied and carrying children in his sack.

Who will you be hoping to see this Christmas season; Santa, or Krampus?

One thought on “Krampus Christmas Tattoos:”