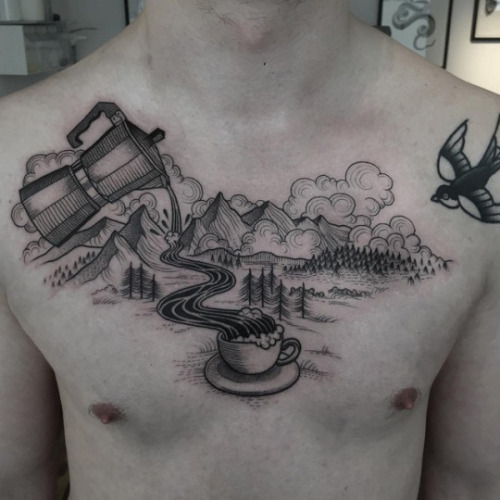 Everyone loves their morning coffee. Some so much that they choose to immortalize it on their skin forever!

There’s a legend that says Ethiopian shepherds first discovered coffee in 800 A.D when they noticed their goats apparently dancing after eating coffee beans. A local monk then made a drink with the bean, which kept him awake all night. Thus, coffee was born!

Here are some coffee facts for you addicts out there. The top three countries that produce coffee are Brazil, Colombia, and Vietnam, with Brazil producing 40% of the worlds coffee.

It is possible to overdose on coffee, but don’t worry, it would take the average person about 100 cups to do so.

Coffee drinkers have a lower risk of Alzheimers disease! Caffeine also has a positive effect on type two diabetes and Parkinson’s. As well as protecting women against skin cancer.

The largest cup of coffee ever was brewed in South Korea in 2014 and was over 3,700 gallons.

Even though the flavour is stronger in a dark roast, they actually have less caffeine than a light roast.

Decaf coffee is not 100% caffeine free.

Coffee is the second post popular beverage in the world, second only to water.

As a tattoo, a grim reaper with a cup of coffee is popular in an American traditional style. Cups of coffee and coffee makers are also popular.

Which is your favourite?