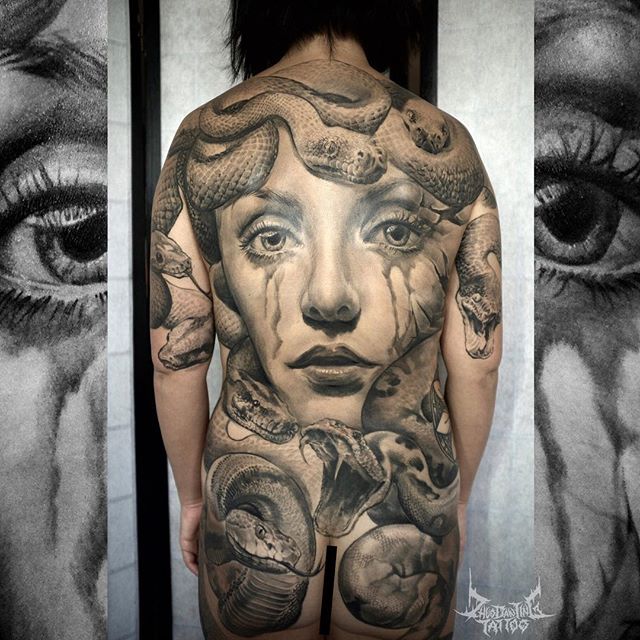 According to Greek mythology, Medusa was born a beautiful woman, one of three sisters known as the Gorgons. When she was still human she was a priestess to the goddess Athena. Being a priestess she was sworn to celibacy.

So how did a beautiful maiden turn into the monster we’re all familiar with? Medusa was really a victim, and turning into a monster was not at all her fault, but the god of the sea, Poseidons. Poseidon met Medusa and was immediately infatuated. He tried over and over again to seduce Medusa, who refused each time. Finally Medusa sought refuge in Athena’s temple to get away from Poseidon. Poseidon didn’t care and went after her, following her into the temple of Athena, where he forced himself on her against her will.

To punish Medusa for having relations inside her temple, Athena turned Medusa into a monster. A woman with snakes for hair that could turn any who looked upon her directly into stone. Seeing herself as a hideous monster, Medusa fled, shunned by all, wandering alone. In her despair her character turned into the monster of her outward appearance.

Many warriors tried unsuccessfully to slay Medusa, but all were turned to stone, and her reputation grew with each kill. Until Perseus was sent to collect her head and bring it to the king Polydectes. Perseus was given quite a bit of help to complete this task, which the other warriors did not have. He was given a sword smithed by the god Hephaestus, Hades’ helmet of invisibility, winged sandals from Hermes, and a mirrored shield from Athena.

Perseus was able to slay Medusa by looking at her reflection in the mirrored shield so he could see her coming and not be turned to stone. He decapitated her, and in doing so freed her from Athena’s curse.

As a tattoo Medusa is often done in black and grey, neo traditional, realism, blackwork, and American traditional. She is most often tattooed as just her head, either visibly decapitated or portrait style.

Who is your favourite mythological Greek character?