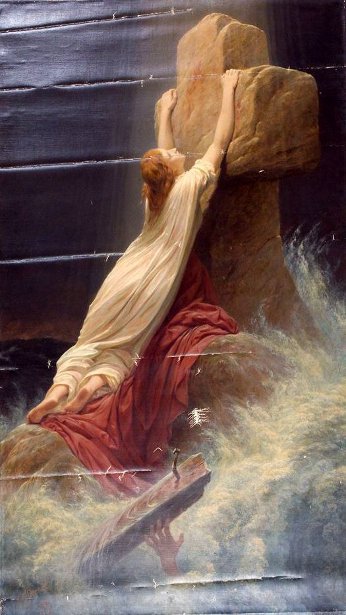 The name Rock of Ages comes from a hymn written by Augustus Toplady in the mid to late 1700’s while he found refuge from a violent storm on a rock at sea. The first two lines of the hymn are “Rock of ages, cleft for me, Let me hide myself in thee.” Rock of ages then became a painting about 100 years later. In the 1860’s Johannes Oertel painted a picture that was first called “Saved, or an Emblematic Representation of Christian Faith” which was later widely reproduced and called “Rock of Ages”.

The image was perfect for tattooing, with its strong, dramatic nautical theme, beautiful woman, and religious symbolism. As a tattoo this piece often also features a sinking ship, multiple women on the rock, skulls, multiple crosses, etc. The image has been recreated as a tattoo for a long time now, and can be traced as a tattoo as far back as the late 19th Century when it was tattooed by Samuel O’Reilly.

It is usually done in old school traditional style, but can also be done in black and grey or realism. The shape and diversity of the piece means it can be done well on many parts of the body. It is most popular on arms or as a full back piece.

The image can have many meanings, but most obvious is that your faith, whatever it is, will keep you safe during troubled times.